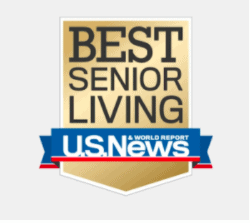 It was just over three months ago that U.S. News & World Report published its first-ever “Best Senior Living” list. Already, the effort has resulted in some early data points on how it impacts senior living operators.

The ratings recognized 1,300 senior living communities as “best” in various categories across IL, AL, memory care and CCRCs. It also highlighted 25 of the highest-rated communities that received “best” rating in IL, AL and memory care.

For some of the senior housing operators that participated, the accolade has been a boon to recruiting, sales and marketing efforts as it has attracted a wider swath of prospective residents and their families. One operator, IntegraCare, is reporting that its prospective residents and their loved ones are now traveling 10 to 15 minutes further to visit the company’s communities.

While that might not seem like a big increase at a glance, such an increase would vastly increase a senior living community’s reach. And on top of that, IntegraCare CEO Larry Rouvelas believes the ratings are a good way to “communicate the complexity” of senior housing in a way that consumers can understand.

“It’s part of our communication to the market about what we are about and who we are,” Rouvelas told Senior Housing News.

With a first year under its belt, Activated Insights — the company behind the U.S. News list in addition to others — is now overhauling the process for next year. In the process, the company is taking cues from the senior living industry, and through that effort, helping operators better market their communities, according to CEO Dr. Jacquelyn Kung.

“Providers can send in their phone numbers, better photos and factual data corrections to be added to each community’s profile page,” Kung told Senior Housing News.

The Best Senior Living list is in its infancy, and thus only time will tell the true impact on the senior living industry. But operators are already using the accolade as a new and handy tool in their operational toolbox.

Many communities have shifted to include the “Best” ratings in marketing materials, from shifting entire selling strategies down to adding the ratings to email signatures. And some communities are realizing a greater sales and marketing reach after being included in the ratings.

For example, Wisconsin-based senior living operator Cedar Community grew its Facebook post reach 57% over its typical average. About a quarter of the people who saw a recent Facebook post touting the accolade clicked on to visit the operator’s website. And of those visitors, 29% were brand-new to the operator.

The will continue in the future, Pretre said, as the company markets future AL and memory care communities to its portfolio, along with being a “great draw” for out-of-market prospects and their families. Pretre noted that one resident even moved into an independent living unit after traveling all the way from the state of Alaska.

“Being recognized as a US News Best is a fabulous differentiator for senior communities in an increasingly crowded field,” Pretre said.

Rouvelas noted similar trends at play at IntegraCare. And if an operator can entice prospects to travel just 10 to 15 minutes further to reach their communities — as Rouvelas said has occurred at IntegraCare — that would potentially increase the community’s reach by up to five times, Kung noted.

A dozen of the Wexford, Pennsylvania-based company’s 15 communities received “Best” accolades, and Rouvelas said that has increased the efficiency at which it can convert leads into tours, and tours into move-ins.

Those that received the designation saw a 10% increase in tour conversions and a 5% increase in move-in conversions, Rouvelas said, while the company reported that the vast majority of its prospective residents showed greater interest in the community once the U.S. News rating was mentioned.

With the ratings have also come a boost for communities in terms of recruitment — especially useful in a tight labor market. Both IntegraCare and Cedar Community said communities now use their U.S. News ratings as a conversation starter for staff.

“Proudly displaying them on our website and in digital messaging offer ongoing outreach that lends additional prestige to and confidence in our work,,” Pretre said.

Rouvelas said the impact of the ratings was “equal or greater” with IntegraCare team members, whose morale increased in the wake of the award.

“They take pride in what they are doing,” Rouvelas said.

“That allows them to have an objective measurement a year later on whether they’ve made progress,” he said. “Beyond the market impact, the ability to organize operational improvements through the eyes of the customer is a very helpful tool.”

Building for the future

Already, 96% of the operators that participated last year have returned to participate in the survey again, which Kung noted was “a rate higher than we all expected.”

“We think this reflects the excitement and value that those who participated see in this program,” she said.

While U.S. news has editorial control over the list and its insights, Kung said that some operators were reluctant to share data based on consumer feedback, noting there was “both interest and a fear of consumer transparency.”

With the results released, Kung said she felt confident fears around transparency were fading as the prestige of the ratings became clear to operators. But Activated Insights and U.S. News are also open to tweaking future surveys to better benefit operators — in fact, they already have.

Kung said that these inaugural profiles showcased positive attributes of a community and “all or nothing” of qualitative public comments shared by the organization. In the coming years, US News can use the full dataset when they create profiles, Kung said, including not just positive data.

The product development roadmap for future senior living ratings is changing based on feedback, Kung said, referencing how a prominent national operator pushed to include phone numbers in operators’ profiles while other providers have wanted photos or unit counts updated.

“I think most changes … will be improvements that providers like,” Kung said.

We’re thrilled to announce HCP has acquired Activated Insights and Pinnacle Quality Insight . Discover what this means for you.